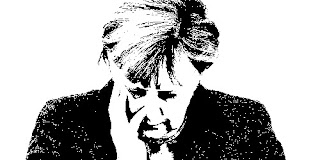 DAILYKENN.com -- Another wave of Islamic invasion is coming and it will wipe out Europe.

That is the message Slovenia sent to Germany's chancellor Angela Merkel.

It is our presumption that Merkel — and all globalists — are looking forward to the invasion with anticipation.


THE EU will not be able to cope with another influx of migrants as more states queue up to launch a torrent of abuse at Angela Merkel.

Mrs Merkel made a "grand tour" of Europe last week in a bid to smooth over a developing row in the bloc over her open door migrant policy.

She met with counterparts in Austria, Croatia, Bulgaria and Slovenia to try to get a handle of what is going on across the Shengen zone.

Now as more and more states are threatening large scale deportations, the Prime Minister of Slovenia is claiming the EU is on a knife edge.

Miro Cerar says that after meetings Mrs Merkel is beginning to understand the complexities facing each country.

But that her 'open door policy' is no solution and that instead she should focus on protecting borders.

Prime Minister Cerar said: "The EU will not be able to improve and it’s existence is in question if it cannot solve the migrant crisis.

“Angela Merkel has understood that the ‘open door politics’ is no solution for the problem.

“I believe, the Chancellor of Germany has started to admit that the problem should be treated more effectively, otherwise the EU won’t be able to improve, because it cannot concentrate and will be unable to give answers to the other challenges.

“If another wave of migrants would hit Europe, that would risk the security, would make the integration impossible, and would seriously put the existence of the EU in danger.”

Permission is granted to use the material in this article providing (1) the byline is included in an obvious manner crediting DailyKenn.com as the author, (2) a link to this page is included and (3) no changes are made either by deletion, addition or annotation. Original compositions at DailyKenn.com are sometimes seeded with decoy data, such as hidden acronyms, to detect unauthorized use and plagiarism.
Comments at DailyKenn.com are unmoderated. Comments containing obscenities, pejoratives, slurs, etc., do not constitute an endorsement of this site, its contributors or its advertisors. Offensive comments may be deleted without notice.
Comment ▼
at 2:56 PM