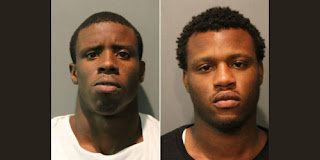 The cousin of NBA star Dwyane Wade was fatally shot while pushing his 3-week-old daughter in a stroller. Two black males have been arrested.

The brothers were allegedly attempting to shoot another man simply because he was not recognized as being from the neighborhood. Classic tribalism?

The crime occurred in Chicago, Illinois and the arrests were reported August 28, 2016.

Aldridge, the first cousin of the Chicago Bulls shooting guard, was struck while pushing her 3-week-old baby girl on a stroller in Chicago’s south side.

Police said the bloodthirsty brothers intended to shoot a man who dropped off women at a house in their neighborhood. They targeted him only because they could tell he was not from the area, police said.


Farmers routed from Zimbabwe; then this happens . . .

Permission is granted to use the material in this article providing (1) the byline is included in an obvious manner crediting DailyKenn.com as the author, (2) a link to this page is included and (3) no changes are made either by deletion, addition or annotation. Original compositions at DailyKenn.com are sometimes seeded with decoy data, such as hidden acronyms, to detect unauthorized use and plagiarism.
Comments at DailyKenn.com are unmoderated. Comments containing obscenities, pejoratives, slurs, etc., do not constitute an endorsement of this site, its contributors or its advertisors. Offensive comments may be deleted without notice.
Comment ▼
at 2:08 PM