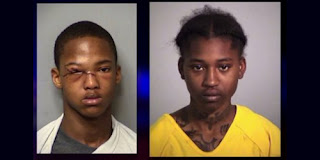 DAILYKENN.com -- Two black teens were arrested in Indianapolis after a crime spree that left five people shot; one of whom died.


About 12:20 a.m. Friday, officers found a man and woman who had been shot multiple times in a car near North Lasalle and Robson streets, Indianapolis Metropolitan Police Department Sgt. Kendale Adams said.

The Indianapolis man, identified as 18-year-old Dayron Staten, died. The woman, 21-year-old Valencia Standberry, also of Indianapolis, was taken to Eskenazi Hospital. As of Friday evening, she was still in critical condition, Adams said.


Jaquisha Love, 18, and Zion Smith, 16, were arrested for the crimes. Smith reportedly injured his right eye with a shotgun.

• When I attended a majority-black high school in Indianapolis in the late 1960s, this type of African-village rascality was common among many of my classmates.

Violence, lack of empathy, and theft were the norm, as were limited vocabularies with the word "m*****f****r being the most commonly used.

The inability to speak comprehensible English was literally incomprehensible. After generations of living as a free people in a Western society, they were still living in an African-village state of existence; hence 'Africanapolis.'

Nearly fifty years later not much has changed.

• Residents have a 1-in-14 chance of being a crime victim in zip codes 46208 and 46205 in a given year. That is, if you live in the area 14 years, you have a 100% statistical chance being a crime victim. Dr. Martin Luther King Jr Boulevard runs through the area.

An updated list of the nation's 25 most dangerous neighborhoods can be found at NeighborhoodScout.com. The areas have one thing in common: They have black-majority populations.

Conclusion: Indianapolis does not have a gun problem. Indianapolis has a young feral black male (and female) problem.

• White-privileged liberals could help ease the crime statistics in those areas by relocating and freely redistributing their privileges to their black residents, all  of whom suffer from trans-generational trauma caused by slavery — and average IQs south of 85.

• Black Lives Matter doesn't seem to be concerned. Rather, BLM seems obsessed with punishing the police officers who risk their lives to enforce civility in African America's neighborhoods.

Permission is granted to use the material in this article providing (1) the byline is included in an obvious manner crediting DailyKenn.com as the author, (2) a link to this page is included and (3) no changes are made either by deletion, addition or annotation. Original compositions at DailyKenn.com are sometimes seeded with decoy data, such as hidden acronyms, to detect unauthorized use and plagiarism.
Comments at DailyKenn.com are unmoderated. Comments containing obscenities, pejoratives, slurs, etc., do not constitute an endorsement of this site, its contributors or its advertisors. Offensive comments may be deleted without notice.
Comment ▼
at 4:26 AM

Email ThisBlogThis!Share to TwitterShare to Facebook
Labels: IN - Indiana