Home » »Unlabelled » The Camp of the Saints author: Europeans must harden their hearts

The Camp of the Saints author: Europeans must harden their hearts 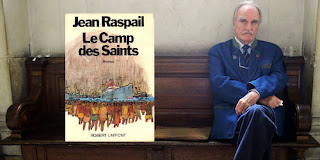 DAILYKENN.com -- 43 years ago Jean Raspail penned The Camp of the Saints, a novel that foresaw the massive invasion of Third-world migrants into Europe from beyond the Mediterranean.

Raspail says the concept for his 1972 book came while visiting a relative in southern France. He recalls his view of the sea from the vantage point of his writing desk and thought, "What if they arrive?"

"They" were a rush of Third-world migrants.

Raspail's book earned him unjustified pejoratives. He was called a fascist, but resists the implications that he is a racist.

"The Camp of the Saints (Le Camp des Saints) is a 1973 French apocalyptic novel by Jean Raspail. The novel depicts a setting wherein Third World mass immigration to France and the West leads to the destruction of Western civilization. Almost forty years after publication the book returned to the bestseller list in 2011. The title is a reference to the Book of Revelation (Rev 20:9)."


Raspail now fears for the future of Europe.

He reminds us that, in less than one century, Africa rose from a population of 100-million to 1-billion and that may double by the year 2050.

The insurgent crisis Europe faces today pales to that it faces in the future when 9-billion people will inhabit the planet, he says.

Without drastic action the flood of humanity into Europe is inevitable, he notes.

He compares the migration problem to a debt that is never paid, but is passed on to grandchildren.

Raspail says the solution will only come when Europeans learn to harden their hearts and remove the illusion of Christian compassion. Otherwise "our country will be submerged."

And they went up on the breadth of the earth, and compassed the camp of the saints about, and the beloved city: and fire came down from God out of heaven, and devoured them. -- Revelation 20:9


Permission is granted to use the material in this article providing (1) the byline is included in an obvious manner crediting DailyKenn.com as the author, (2) a link to this page is included and (3) no changes are made either by deletion, addition or annotation. Original compositions at DailyKenn.com are sometimes seeded with decoy data, such as hidden acronyms, to detect unauthorized use and plagiarism.
Comments at DailyKenn.com are unmoderated. Comments containing obscenities, pejoratives, slurs, etc., do not constitute an endorsement of this site, its contributors or its advertisors. Offensive comments may be deleted without notice.
Comment ▼
at 4:47 AM