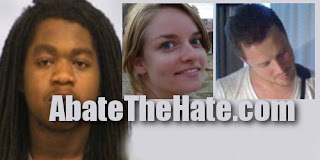 DAILYKENN.com -- Four people were killed and 20 others injured when a vehicle crashed into a crowd in Austin, Tex. last year.

The driver of the vehicle -- Rashad Owens, 24 -- entered a 'not guilty' plea to murder charges last week relating to the crash.

The crash occurred at the South by Southwest Festival, a music and film gathering, in 2015.

Owens was intoxicated at the time, police say. He's been charged with four counts of murder.

• Imagine the outcome had a white drunk plunged a vehicle into a crowd of black revelers. The driver would likely have been beaten on the spot.

In fact, a driver in Detroit struck a little black boy who darted in front of his truck last year. 54-year-old Steven Utash was beaten by a black mob into critical care. Utash was not intoxicated and the Detroit accident was unavoidable.

The man accused of killing four people and injuring more than 20 others in a drunk driving crash at the 2014 South by Southwest Festival pleaded not guilty to capital murder and four counts of murder Thursday.

Owens is facing a number of charges for the deadly crash including capital murder and more than 20 counts of aggravated assault with a deadly weapon. He’s been in the Travis County Jail since March 14, 2014 with a bail of $5.5 million.

Police said Owens was driving drunk and running from police when he crashed through a barricade into a crowd of people at SXSW. The crash killed Jamie West, 27, Steven Craenmeh 35, Deandre Tatum, 18, and Sandy Le, 26.

Prosecutors previously said they will not seek the death penalty in the case against Owens.


Permission is granted to use the material in this article providing (1) the byline is included in an obvious manner crediting DailyKenn.com as the author, (2) a link to this page is included and (3) no changes are made either by deletion, addition or annotation. Original compositions at DailyKenn.com are sometimes seeded with decoy data, such as hidden acronyms, to detect unauthorized use and plagiarism.
Comments at DailyKenn.com are unmoderated. Comments containing obscenities, pejoratives, slurs, etc., do not constitute an endorsement of this site, its contributors or its advertisors. Offensive comments may be deleted without notice.
Comment ▼
at 10:39 PM