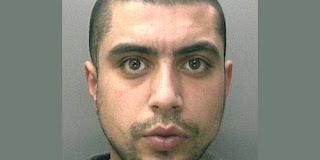 DAILYKENN.com -- 25-year-old Ibrar Zada was nonplussed when informed by attendants the airliner had run out of halal food.

Reports say the Muslim verbally abused those flight attendants. That led to his arrest when the plane landed in Birmingham, England from Egypt.

The convicted drug felon was ordered to cough up a £1,400 fine for his impudence.

A court heard shortly into the flight on March 27 this year, the cabin crew ran out of hot food but continued to serve the passengers with meals left in the kitchen.

But when a staff member approached Zada he demanded halal food, which staff told him they didn't have.

Later on in the flight, the convicted drug dealer used the attention button to call cabin crew to him and again demanded Halal food

Zada then started to use foul and abusive language towards the staff and continued to show aggression despite being repeatedly asked to calm down.

He was then arrested by waiting police when the Boeing 757 plane landed at Birmingham International Airport in the early hours of March 28.

Zada was found guilty of using 'threatening, abusive or insulting words' towards members of the crew in breach of the Civil Aviation Act 1982 after a trial at Birmingham Magistrates' Court.


Permission is granted to use the material in this article providing (1) the byline is included in an obvious manner crediting DailyKenn.com as the author, (2) a link to this page is included and (3) no changes are made either by deletion, addition or annotation. Original compositions at DailyKenn.com are sometimes seeded with decoy data, such as hidden acronyms, to detect unauthorized use and plagiarism.
Comments at DailyKenn.com are unmoderated. Comments containing obscenities, pejoratives, slurs, etc., do not constitute an endorsement of this site, its contributors or its advertisors. Offensive comments may be deleted without notice.
Comment ▼
at 12:11 AM