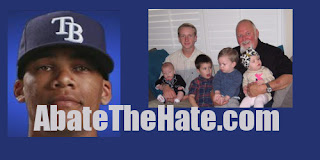 DAILYKENN.com -- A former pro-baseball player has been arrested for the murder of home security technician.

Brandon Martin was sought after the bodies of two men -- Barry Swanson, 62, and Michael Martin, 64 -- were found dead at a Corona, Calif. home.

Michael Martin was the father of 22-year-old Brandon.

Apparently Swanson had been called the elder Martin's home for security advice.

Martin received an $860,000 signing bonus when he signed with the Tampa Rays. That disputes the predatory left's contention that violent black crime is caused by income disparities.

A former pro baseball player was arrested Friday in a double murder case in Corona.

Brandon Martin was being sought after the bodies of two men were found inside a home in the 1000 block of Winthrop Drive Thursday night.

Martin once had a bright future as a pro baseball player. Now, the 22-year-old is suspected of murdering his 64-year-old father Michael Martin and 62-year-old Barry Swanson, a sub-contractor for ADT Security. Swanson's employer said he was called to the home for security advice.

"An off-duty Corona police officer on his way to work located a similar vehicle that was taken from the scene last night," said Sgt. Paul Mercado with the Corona Police Department.

Authorities said Martin led police on a short pursuit in Swanson's truck, which ended after Corona police attempted two PIT maneuvers to disable the vehicle. That's when Martin ran for it and jumped over a fence.

Nearby Foothill Elementary School was temporary placed on lockdown. Police set up a perimeter and told neighbors to get inside.

"I was very shocked because my garage door was open, and they said he ran inside someone's house, and I'm like oh my gosh!" said Terry Jackson of Corona.

Investigators tracked him to a home where inside a woman was showering. She was not injured. They said Martin tried to escape by jumping out a second-story window.

"He subsequently jumps out of a second-story window into the backyard where we had a police dog waiting for him," said Mercado.

The K-9 did bite Martin as he was apprehended. The suspect was taken to a local hospital for treatment.

Neighbors were in shock over the identity of the suspect. Martin is well-known in Corona sports circles. In 2011, the one-time baseball star was the 38th pick in the Major League draft out of Santiago High School.


Permission is granted to use the material in this article providing (1) the byline is included in an obvious manner crediting DailyKenn.com as the author, (2) a link to this page is included and (3) no changes are made either by deletion, addition or annotation. Original compositions at DailyKenn.com are sometimes seeded with decoy data, such as hidden acronyms, to detect unauthorized use and plagiarism.
Comments at DailyKenn.com are unmoderated. Comments containing obscenities, pejoratives, slurs, etc., do not constitute an endorsement of this site, its contributors or its advertisors. Offensive comments may be deleted without notice.
Comment ▼
at 9:14 AM