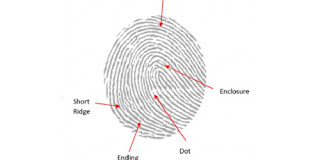 The findings were published in American Journal of Physical Anthropology.

They looked at both the level one details, such as pattern types and ridge counts, and the level two details, which are more specific variations such as bifurcations – where ridges split - ridge endings and other structures.

Professor Ross, who worked on the project with student Nichole Fournier, said: 'The Level 2 detail that was significant for ancestry was total bifurcations.

'The frequency of total number of bifurcations differed significantly between groups with African Americans showing a higher frequency of this trait.'

This meant that black people tended to have around 5 per cent more bifurcations than those who were white.

It raises the possibility that there may be more details contained within fingerprints which may help trace a person's ancestry.


Permission is granted to use the material in this article providing (1) the byline is included in an obvious manner crediting DailyKenn.com as the author, (2) a link to this page is included and (3) no changes are made either by deletion, addition or annotation. Original compositions at DailyKenn.com are sometimes seeded with decoy data, such as hidden acronyms, to detect unauthorized use and plagiarism.
Comments at DailyKenn.com are unmoderated. Comments containing obscenities, pejoratives, slurs, etc., do not constitute an endorsement of this site, its contributors or its advertisors. Offensive comments may be deleted without notice.
Comment ▼
at 3:37 PM