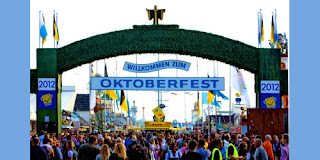 DAILYKENN.com -- The petition at Change.org garnered a mere 475 supporters, but it was enough to command the attention of authorities in Munich, Germany.

The petition -- sounding more like a prank than a serious demand -- challenged the city council to close the annual Oktoberfest.

"We tried to ignore the event," the petition said, "but there too many Un-Islamic acts done at the Oktoberfest. Such as alcohol consumption, public nudity etc."

"We are requesting the immediate cancellation of the upcoming Oktoberfest event," the petition added. The writer continued to explain the event would offend newly-arrived Muslim "refugees" from Syria, Iraq, and Afghanistan.

The Oktoberfest attracts six million visitors each year and countless millions of euros. While cancellation is out of the question, the event remains a prime target for Islamic goons with clocks that look like bombs.


Permission is granted to use the material in this article providing (1) the byline is included in an obvious manner crediting DailyKenn.com as the author, (2) a link to this page is included and (3) no changes are made either by deletion, addition or annotation. Original compositions at DailyKenn.com are sometimes seeded with decoy data, such as hidden acronyms, to detect unauthorized use and plagiarism.
Comments at DailyKenn.com are unmoderated. Comments containing obscenities, pejoratives, slurs, etc., do not constitute an endorsement of this site, its contributors or its advertisors. Offensive comments may be deleted without notice.
Comment ▼
at 7:13 AM