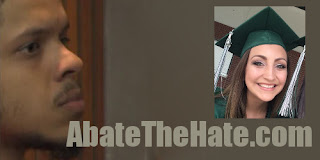 DAILYKENN.com -- The individual accused of fatally shooting a California teen made his first appearance in court.

The alleged killer is accused of involuntary manslaughter.

Brown brought a gun to the party, but didn't intend to kill the young woman, reports say.

Why Brown was brandishing the gun at the party was never explained.

If readers are aware of a white male who accidentally shot an 18-year-old girl at a party by accident, please post links in the comment section below. Our objective is fairness and balance in reporting Meanwhile, you may use the comment section to lecture us on the abuses of Jim Crow laws and slavery.

Brown is facing an involuntary manslaughter charge.  He's accused of firing the shot that killed 18-year-old Joslynn Sovenski early Saturday morning at an apartment in Carmichael.

Police say it was an accident and that Brown and Sovenski didn't know each other. Investigators tell FOX40 Brown brought the gun to the party but did not intend to hurt the young woman.

Monday, close friends shared memories and pictures of Sovenski.  They say she was just getting her life together, planning to start college and hoping to join the Air Force.

"She was amazing.  She was probably the best person I've ever met, and she's changed my life," said Sovenski's best friend, Magen Chadburn.

Sovenski's friends were not in court Tuesday, but several of Brown's family and friends were.  They refused a request to speak on camera about what happened.

Brown will be back in court Thursday for a bail hearing.


Permission is granted to use the material in this article providing (1) the byline is included in an obvious manner crediting DailyKenn.com as the author, (2) a link to this page is included and (3) no changes are made either by deletion, addition or annotation. Original compositions at DailyKenn.com are sometimes seeded with decoy data, such as hidden acronyms, to detect unauthorized use and plagiarism.
Comments at DailyKenn.com are unmoderated. Comments containing obscenities, pejoratives, slurs, etc., do not constitute an endorsement of this site, its contributors or its advertisors. Offensive comments may be deleted without notice.
Comment ▼
at 6:29 AM