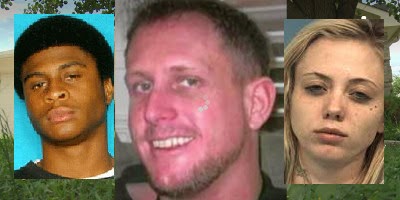 The two then returned to the murdered man's home over the next few days helping themselves to firearms, credit cards, cash, electronic equipment, and other loot.

Apparently Hanks had an appointment with the victim, Jerrod Stanford, allowing Simms to gain entry to the home.

A stench and a tip led investigators to the crime scene, according to another report.

The crime occurred in September in Round Rock, Tex.

The charges against Simms and Hanks were reported November 24, 2014.

A man and a woman have been charged with capital murder for the death of a Round Rock man killed during a robbery at his home in September. Investigators say on Tues., Sept. 16 at around 5 p.m., the Williamson County Sheriff's Office received information from an inmate in the Travis County Jail regarding a possible homicide that had occurred at 210 Chandler Crossing Trail in Round Rock.

Deputies responded and located Jerrod Stanford, 33, dead inside the home. An autopsy determined Stanford died from a gunshot wound and his death was declared a homicide. Police say Nov. 20, after a lengthy investigation, Da Ryan Tarrell Simms and Lindsay Taylor Hanks were arrested and charged with capital murder for Stanford's death. Investigators say Hanks had arranged to meet with Stanford at his residence to rob him.  During the meeting Simms entered the home with a gun and shot Stanford twice, killing him.

And over the next few days Simms and Hanks returned to Stanford's home and took several firearms, assorted electronics, money, credit cards and a vehicle parked in the driveway. Simms is booked in the Williamson County Jail on capital murder charges. Hanks is currently in custody at the Travis County Jail and will be transferred to Williamson County at a later date on capital murder charges, police say.


Permission is granted to use the material in this article providing (1) the byline is included in an obvious manner crediting DailyKenn.com as the author, (2) a link to this page is included and (3) no changes are made either by deletion, addition or annotation. Original compositions at DailyKenn.com are sometimes seeded with decoy data, such as hidden acronyms, to detect unauthorized use and plagiarism.
Comments at DailyKenn.com are unmoderated. Comments containing obscenities, pejoratives, slurs, etc., do not constitute an endorsement of this site, its contributors or its advertisors. Offensive comments may be deleted without notice.
at 12:50 PM