Imagine Barney Fife driving around Mayberry in one of these.

A Florida sheriff says the massive military M-RAP, or mine-resistant, ambush-protected vehicle, is not a waste of money.

It's the same excuse they use when handcuffing old white ladies when they make traffic stops: A precautionary measure to protect themselves. 'Cause you just never know.

It's the old 'we need to protect ourselves' excuse.

Walton County Sheriff Michael Adkinson says he picked up the vehicle from the U.S. military for a mere $2,500.

Meanwhile, they refer to our rifles as "assault weapons" if they include a scope while ignoring the war-zone violence in America's burgeoning urban settings.

Mine resistant? In Defuniak Springs, Florida?

Those who follow my post understand: I don't adhere to wild conspiracy theories. But I do understand the federal government is no friend of We the People and uses subtle psychology to convince us of bizarre notions from so-called civil rights to the need for seat belts.

Selling local police departments high-end military equipment at discount prices has the same effect of flying helicopters over prisons: We the Inmates become accustom to such surroundings and are taken aback when the equipment is used against us.

We saw an example of this in 1980 when Fidel Castro unloaded his prison population on us during the Mariel boat lift. Once identified, Cuban convicts were incarcerated and that, in turn, led to rioting. As part of their offensive strategy, the military repeatedly flew helicopters over the prison until the inmates became accustom to the presence and paid them no mind.

The government also monitors citizen feedback; like the income tax, they wait until we become accustom to abuse, the ratchet the restraints to the next level.

We must be always mindful that, while our local police departments are technically disconnected from the U.S. military, they do receive substantial funding from federal bureaucrats and will follow orders from their high command rather than hamper the cash flow.

After all, if the sheriff in the adjacent county has an M-RAP...

From our source we read: 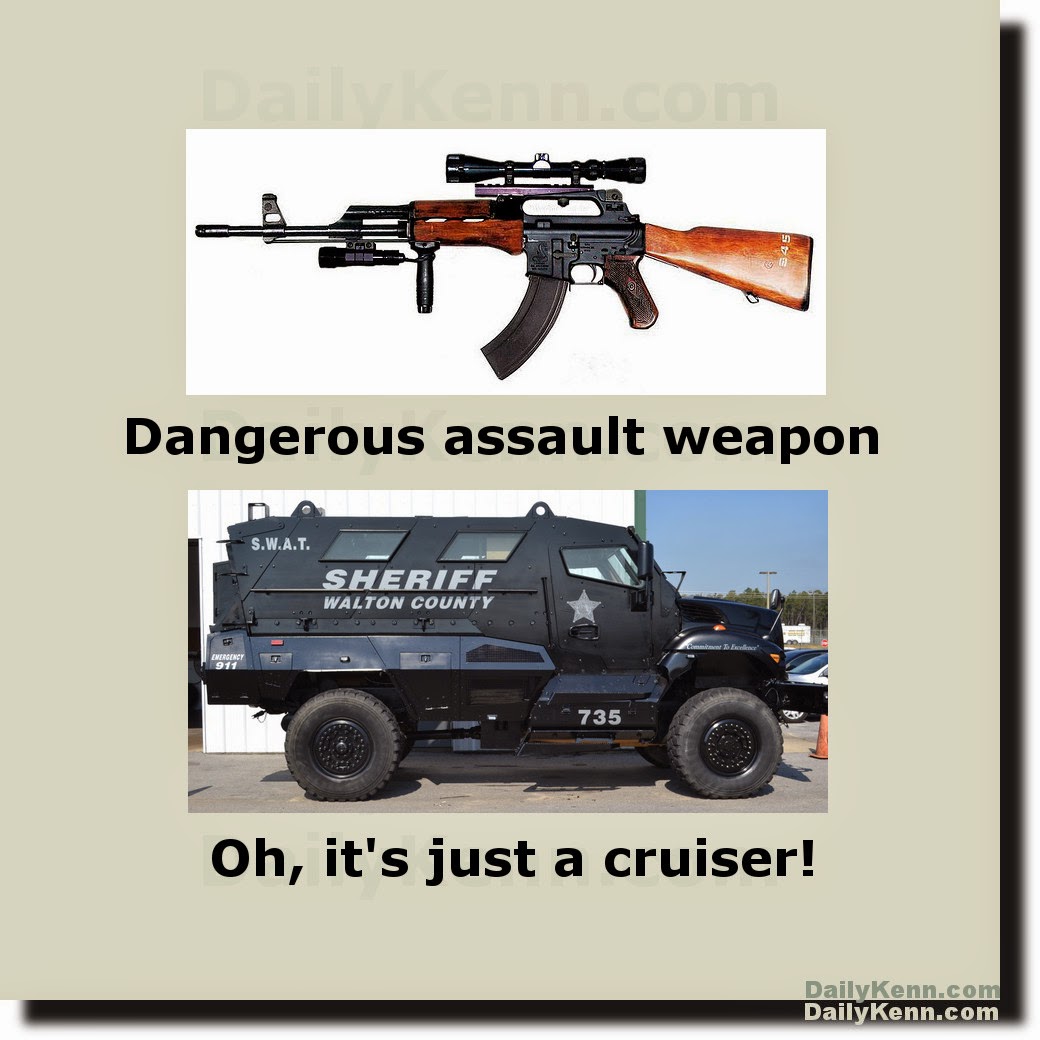 Walton County Sheriff's officials are defending themselves against criticism over a new piece of equipment.

The military removed all of it's equipment from the m-rap before selling it to the Walton County Sheriff's Office for $2,500.

Many residents say they don't see the need for this type of armored vehicle but Sheriff Michael Adkinson says his employees will use it strictly to protect SWAT team members.

Sheriff Adkinson added, "It is a tool. In it as itself it is not bad or good. It is how it is used that justifies that. From our stand point it is simply a piece of protective equipment. Again, we hope we never have to use it, and I do recognize those that are critical of that."

Adkinson also pointed out that many other Sheriff's offices around the state and here in the panhandle have bought similar version of the M-RAP.

Please report errors
Like this story?
Help Kenn spread the word by clicking it onto Facebook. See icon below . . .
Permission is granted to use the material in this article providing (1) the byline is included in an obvious manner crediting DailyKenn.com as the author, (2) a link to this page is included and (3) no changes are made either by deletion, addition or annotation. Original compositions at DailyKenn.com are sometimes seeded with decoy data, such as hidden acronyms, to detect unauthorized use and plagiarism.
COMMENTS: The use of vulgarities and pejoratives may result in your comment being zapped.
at 5:58 PM