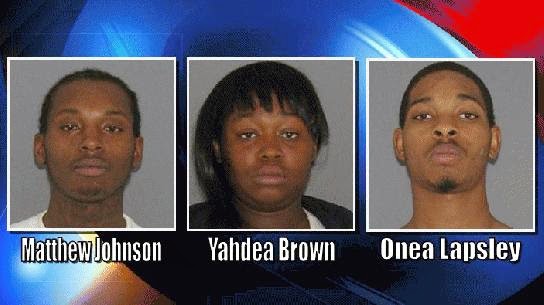 "Ohio Attorney General Mike DeWine announced charges against four adults and one juvenile in connection to the unprovoked, race related attacks against people near the Taste of Cincinnati in May," according to WKRC.

"One of the victims is the son of Hamilton County Prosecutor Joe Deters."

From WKRC we read:


CINCINNATI (WKRC) -- Charges have been filed against four adults and one teenager, in the attacks on people near the Taste of Cincinnati.

The 17-year-old is facing the same charges in juvenile court. The indictment lists three victims of the attacks on West Ninth, at about midnight, a few blocks from the Taste of Cincinnati. One of the victims is the son of Hamilton County Prosecutor Joe Deters. Deters requested that the state Attorney General's office appoint a special prosecutor. Daniel Breyer is handling the case.

Because they are accused of hurling racial epithets at two white men before beating them, five black males were charged Tuesday with ethnic intimidation and other crimes in the May beating of Jonathan Deters, son of Hamilton County Prosecutor Joe Deters.

"We believe the sole motivation (for the alleged attack) was because of the color of their skin," Assistant Ohio Attorney General Daniel "Woody" Breyer said of the incident.

Witnesses told police, Breyer said, the five adults and one juvenile charged in Deters' beating said, "let's get the (epithet) white guy. And minutes later: "There's another one," when they spotted another white man whom police allege was beaten by the same five.

They are accused of the May 24 beating of Jonathan Deters, 23, Deters' girlfriend and another man, of whom little is known because the indictment lists the victims only by their initials – an infrequent but occasional practice.

Jonathan Deters was at a private graduation party on Downtown's West Ninth Street when he walked his sister to her car. As she drove away, she saw the five men jump her brother.

That's when Deters' girlfriend, Allison Crable, come to his aid, landing one or two punches before she was hit by some of the men. Crable is the daughter of former Moeller coach and professional football star Bob Crable,

It wasn't just Alison Crable, though, who came to Deters' aid.

"The Deters beating was heading for something worse," Breyer said. "when an older black lady rather indignantly stepped in and said, 'Stop it. I'm calling the police right now.'

"Jon probably got his life saved by an older Africa-American woman," Joe Deters said. "She said they would have killed him."

Jonathan Deters was hospitalized after the attack with a concussion and minor injuries to his arms, legs and face.

Because no money was taken and the comments witnesses said the accused five made, Breyer believed ethnic intimidation was an appropriate charge.

"I can't find any other motive than the color of skin," Breyer said.

"I don't care if it's white on black or black on white," Joe Deters said, "when the motivation to commit crime is race, it's just disgusting."

The five were identified, Breyer said, by a call to Crime Stoppers. Police then questioned someone named by the tipster and the investigation grew from there.