Home » »Unlabelled » For the people? Or for the government?

For the people? Or for the government?

The cop looked in my trunk and noted prescription medicine.

My daily doses were neatly organized in those plastic containers that have a compartment for each day of the week.

The inspecting officer promptly informed me the plastic containers were illegal. Prescription meds must be transported in the original containers; the pill bottles from the pharmacy.

That, off course, is very inconvenient for those required to take multiple medications every day. Nonetheless, the officer explained, it was necessary. Without the meds in their original containers, authorities may find themselves burdened with the inconvenience of running lab tests on each pill to determine their actual content.

Silly me. Don't I realize what is good for the government is good for me? That the inconvenience of transporting prescription meds in original containers is ultimately for my own good? That keeping drug abusers off the roads are for my safety?

I understand that America is no longer governed by the people; nor is it for the people. Laws and regulations exist for the convenience of the government. It's akin to the store manager who arranges the work schedule. He has weekends and holidays off.

I understand that drunk drivers kill and maim thousands every year. I also understand we the people need to hire cop's to keep our roads as safe as possible.

I fail to see, however, how a young cop with a loaded gun pointed at my head at three in the morning could be for my own safety. The gun, after all, doesn't know who's holding it. A loud noise could startle him and cause a reactive trigger finger to end my life. The gun doesn't know the finger on the trigger belongs to a guy wearing a badge.

It's for the government's safety, not my safety. Or, in this case, the safety of the cop, a government agent. His safety comes first; mine last.

If confession is good for the soul, then my soul will be soothed by admitting that I did not come to a complete stop as I made a right turn onto a rural road. The oncoming headlights screeched to a near halt before doing a U-turn. I caught a glimpse of the cop's logo on the side and pulled into the grassy berm even before he turned on his flashing lights.

No sooner had I opened the car door and stood to my feet, I was greeted by the blinding light atop the patrol vehicle with the silhouette of the anticipated screaming officer. "Get back in you vehicle!" I raised my left hand to block the light's glare. Is he holding a gun? Indeed he was. Both his hands grasped the weapon. It was pointed directly at my head.

I paused a moment, not needing to feign confusion (it was extremely stressful), and made the snap judgement that I was in the presence of either a poorly trained cop, a well-trained cop following bad policy, or an idiot. Either way there was a loaded gun pointed at my head and, figuring I had achieved my objective (he wouldn't know I wasn't wearing my seat belt), plopped back in the driver's seat.

The government agents -- the cops -- were in control.

The gun toting cop was now looming at my door with his flashlight surveying the innards of my convertible, the top conveniently down to enjoy the starry night. His partner was on the passenger side. There was a brief but loud lecture on teaching Driver's Ed kids never to get out of a car when stopped by a cop. My inclination was to respond that I took Driver's Ed in 1969, years before he was born. I held my peace.

I've been trained to inform officers that they do not have permission to search my person nor my vehicle. My objective, however, was not to annoy the cop, but to get out of a ticket.

When asked to "exit the vehicle" I complied. I was promptly cuffed, hands behind my back. Again, it's government control.

• FOR MY OWN GOOD

With my hands securely cuffed behind my back, I could not reach for a gun or knife. Nor could I reach for a cell phone. What if I needed to call 911 and report abuse? Request the presence of a state cop? Call my lawyer? What if we were attacked by a rabid dog?

Let's get extreme; facetious. What if the cops were gunned down by a dopehead in a drive-by shooting? How could I call back-up while in handcuffs? Don't these guys know that cuffs are not in their best interest?

What if I sneezed? Needed to scratch my ear?

Beware of cops asking questions that begin with the word, "Why".

The officer shouted something about the danger of me lurching out of the vehicle.

Once the three of us were standing at the back of my convertible in plain view and earshot of his dash cam, the cop continued his shouting. He wanted to make the point that he was upset -- outraged -- that I had gotten out of my car when initially pulled over.

Then came the 'why' question.

"Do you want to tell me why you bolted from your car?" he shouted; or something akin to that.

I pondered the psychology of the situation -- handcuffed and helpless in the presence of two cops and blinding lights: spot light, headlights and flashing emergency lights -- and measured my response.

This is not the question I expected. I had anticipated he would ask a 'why' question regarding the seat belt.

The cop was obviously concerned about his gun, my head, and the fact the former had been pointed directly at the latter. If I answered him, would I be admitting to bolting from the car? Thereby justifying rashness and needless endangerment? If I refused to answer him, would I guarantee myself a traffic ticket for disregarding a stop sign? I mumbled something about following protocol and that, I suppose, registered in his mind as an admission of guilt. (It wasn't).

A breath test proved I was not intoxicated. Nor have I ever been: Fifty-nine years; I've never tasted an alcoholic beverage of any kind. If these guys were looking for drunks, they snagged the least likely candidate in the county; maybe the country.

Against legal advice, I gave the officers permission to search my car. The contents of the trunk bore out my story: I was heading out of town, not heading home from a bar. There was a travel bag, clothes and paper sack with the meds. Contraband? It depends on the packaging.

It's a microcosm of government vs citizen control and convenience.

Questions need to be raised. When is government control reasonable? When is it excessive? Abusive? Just plain silly?

Don't get out your car when pulled over. It's in the interest of the government agent, the cop.

You must carry a personal ID (drivers licence) and a vehicle ID (registration). It's for the convenience of the government.

Wear handcuffs. It's for the officer's safety. Your safety and convenience are not a consideration.

Keep your meds in original containers. That is a superlative inconvenience for citizens. It can cause inadvertent confusion and dire health consequences. It doesn't matter. The government's interest is supreme. Your interest is not considered.

The cop eventually removed the cuffs and sent me on my way. No ticket for disregarding the stop sign. Mission accomplished.

If you think this article is about the futility of wee-hour traffic stops, you're missing the point. Cops watching out for drunk drivers is a good thing. If you think it's a gripe about over-the-top bully cops you're still missing it. If you think the article was meant to fuss about cops protecting themselves from bad guys, you still miss the point. Of course they need to be cautious.

The message is in the method; the fact that the government acts in its own best interest. Always.

What bothered me most was not the handcuffs; nor the sheer terror of staring through blinding lights at open end of a police revolver. Most troublesome was the foolish law that forbids the feeble and elderly from transporting meds in organized containers.

I wonder what other crimes the cops would have found had I annoyed them.

We're a nation of citizen criminals; and we don't even know what crimes we're committing.

I'm reminded of the incident earlier this month when dozens of motorists in Denver were handcuffed. Their 'crime' was being in the vicinity of a recent bank heist. The cops cared little for the comfort, well-being or agenda of the citizens. As government agents their agenda was all that mattered.

According to news reports, Denver police forced dozens of drivers to abandon their vehicles at gun point. The cops were toting shotguns and rifles, according to witnesses. Each occupant of 25 cars were handcuffed. The ordeal lasted about two hours and the cops finally got their man. Government for the government, by the government. The end justified the means.

In my case the gun-toting cop left me with parting words: a casual warning about not wearing my seat belt. 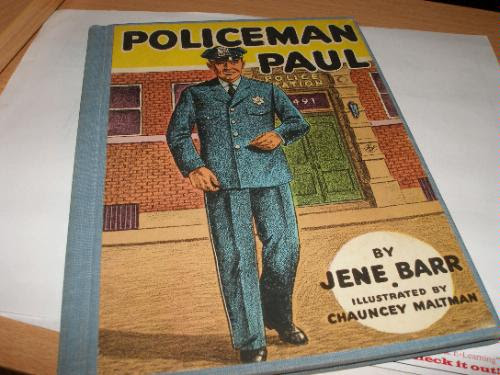 My earliest memories include a children's book called Policeman Paul. The over-sized print and artist renderings following Policeman Paul as he protected citizens, checked for locked doors and generally did good deeds.

Another memory was real life. I was a tot passenger in Mom's car as she maneuvered through downtown traffic. A nearby cop was screaming at another motorist. He then shattered the motorist's taillight with his foot.

I learned a few lessons that day.

First, the print image of the ideal cop is often at odds with the real Police Paul who kicks in taillights in fits of rage.

Second, all cops wear badges but not all wear halos.


Like this story?
Help Kenn spread the word by clicking it onto Facebook. See icon below . . .
Permission is granted to use the material in this article providing (1) the byline is included in an obvious manner crediting DailyKenn.com as the author, (2) a link to this page is included and (3) no changes are made either by deletion, addition or annotation. Original compositions at DailyKenn.com are sometimes seeded with decoy data, such as hidden acronyms, to detect unauthorized use and plagiarism.
COMMENTS: The use of vulgarities and pejoratives may result in your comment being zapped.
at 4:31 AM